Wow, I just read the Galaga No-Fire Cheat write-up, and that is one of the coolest things I read in ages. I love the fact it’s possible via Mame to dig though the code. I love that people care enough to do it, and I love the cracking open of an old school game cheat, to solve the how/why it occurred.

hat tip to Raymond for this gem.

I’ve just deleted 100+ spam comments that accumulated while I’ve been on holiday, so if you posted something brilliant and your work of art is not there, I’m sorry.

Plans for the new year are more Nikon camera stuff, more Curse of the Azure bond bug fixes, and setting a new media server, as the aging SageTv server works but the problem set has evolved.

Version 1.1.7 of Curse of the Azure Bonds is now up on the Google Code project site (just the Windows build again).

Fixed in this version:

Version 1.1.6 of Curse of the Azure Bonds is now up on the Google Code project site (just the Windows build again).
Fixed in this version:

I’ve been experimenting at work. Using Node.js to make a very simple web back-end and using jQuery/javascript on the client side. For work it’s to test out idea’s for “web based product configurations” stuff.

But I’ve been re-purposing the code/lessons at night: 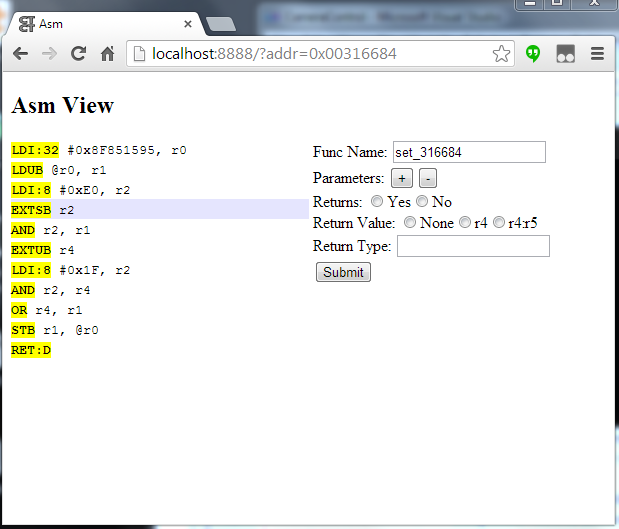 I’ve made those two parts as panels and you can scroll (arrow keys) up/down though the assembly lines (plan to link highlighting when there are more views) and the function details is auto populating and dynamic, and it’s ajax’ed back to the node.js server, and persisted to disk.

Small starts, but I’ve found a “framework” in which to explore some idea’s I’ve struggled how to UI for years, so am over the moon with how this is progressing.

The bonus: the resulting tooling is web based so collaboration is baked in…

A while back I posted some sample images, based on service mode on my D5100, and it was noticed that the mode we called Overscan (because it shows the dark pixels of the image) also had the Nikon Star Eater filter turned off.

I released a patch that turned overscan on for the D5100, but the black area makes the processing of the images ugly, and I never released it beyond that as it didn’t seem like a good end goal.

I have today tracked all the code paths down to find the two that turn the Star Eater filter on/off for over scan photo and/or when the exposure is longer than 1/5 second.

After some testing where I was getting confused with default exposure setting of RawDigger, I can verify it works.

NEF files, of 10 second exposures, showing it working as compared to the overscan mode and compared to orignal firmware https://simeonpilgrim.com/photos/nikon_star_eater_samples.zip

I expect this will be released to the BETA firmware patch tool sometime this weekend after more testing is done by the core team, but I would be interested in what Models astro people are keen for this on (no promises), I’ve got the D5100,D7000 done, but other models look “the same” albeit a touch different.

Next Astro features in the “to be done” list, is trying to remove the ~1.4 multipliers on the Red/Blue channels, and removing the black pixel = 0 adjustments also made.

I just discovered a feature I’d never seen before in the Tortoise SVN Client, I did a update from my work repository, knowing there were a large number of project file changes that would conflict.

Normally I would scroll through list of changes and just visually locate the red lines.

But lo and behold, there is a button that takes you to the next conflict, magic!

Arrrg, National and Labour are arguing about first time home buyers, and it’s driving me nuts.

I’m reading some good posts from NZ econ people, which frame it nicely in econ speak, but it’s just so simple in my mind.

If you want first time buyers to get cheap houses, all house must be cheaper, so that there are cheap houses for them to buy.

I will now make up some numbers:

So with these made up numbers in mind, we have the two main political parties frothing at the mouth because group B can’t buy houses, and its always been their dream.

Queue sad story of dreams here…. I dream to… oh dreams of the group B people, anyway we all have dreams, work towards them and realise you can’t have it all. Because I have lots of dreams, and so far I’ve not been to the moon!

So to me the “first home buyers” argument is really group A needs to lose some of their capital wealth in their houses to help bring all house prices down, so group B can have cheap houses. How has the big drop in house prices worked for the USA so far???

So which party would be stupid to ask the majority of the country to lose money now and forever, so that another group can get a house. None, they don’t talk about it in this frame of reference, but they are one and the same to me.

How would we go about destroying that value group A thinks they have: be that with tax (first time buyers grants, government houses for cheap, etc) or allowing faster building of houses, or destroying the markets desire for NZ property, you know act ‘North Korea like’ until the world is scared of us. Ether way “The Answer” is going to be unpopular.

National’s solutions seems to be a non-solution solution, but a political “response”.

What I don’t understand is why did Labour start playing this debate/issue.

There are the core base in the Labour camp, who will vote Labour ether way? Are they trying to rev them up, and get them to mobilise the swing voters? Are they trying to win the hearts of the swing voters, the group B people might like the idea of cheaper houses, but as soon as they own a house they will want to increase in value, thus become group A, and not want this policy again. Or the group A people that “have a heart” but are too slow see what this would “require to fix” or is Labour also not really caring about the issue at all, and just trying to make National demonstrate has “no heart for the poor”

I say this as swing voter, that’s not found of National’s sell it all policy, because how well did the Toll Rail sell/buy back program work out? So now there’s no way I can vote for Labour with a stupid policy stance like this, so I’m back to National, thank Labour.

It all drives me nuts, mix in the NSA spy electronic crap, and NZ rolling over for trade agreements, Labour of all people lowering the drinking age, to vote buying (n years ago) because 18 year olds are “adults”, yet also insisting we need more/tighter tobacco/drink/drug control because those aforementioned adults need to be told how to live (long live the nanny state).

Mean while the politicians embarrass themselves and our country with their antic’s in the “debate” chamber, and around the country. What a bunch of clowns.

And there lies the rub, I don’t trust them to do a mediocre job, I’m not sure how to make them be less stupid, so do I shut-up take my lumps, or join them. Sigh….

The D5100 had a string “A:\\LvRaw  .raw” that I notice soon after first decoding the firmware files. I could never fulling put together the how and why of what the code was doing (looking in Task 30 of the D5100 firmware or @0x1AC268 of v1.01 firmware)

After the Magic Lantern guys announced RAW movies and it becoming a hot topic I doubled my efforts to work out how the code worked. But still it evaded me.

Then I bricked my D5100 and I stop working on the project for a month as I’d lost my mojo. Also my replacement D7000 was pretty much all a man could need. But that elusive RAW video mode the Magic Lantern guys have was a very shinny target.

So reading the D7000 firmware with more vigor I discovered why the D5100 didn’t make sense, Nikon had removed the liveview raw saving code, because it’s present in the D7000, and with a simple tweak I got it working.

So for now it’s truly the raw buffer (the part that’s put in the .NEF but with none of the EXIF data), and it takes a hack to turn on, and I’ve not nailed the FPS, nor do I have a clue how to speed it up, but it’s all very cool.

I’ll post a couple of files in case anybody is keen to try decode them. https://simeonpilgrim.com/files/Liveview_silent.zip

Turns out that after some data review, the files contents appear to be the left over ram from taking previous pictures and not the current raw buffer. sigh. Well at least we now how a button, that is wired up to run in live view and a complete understanding of the file handling process, albeit a slow process.

Ah, it only took ~15 years, but I have now completed the series. What started out as a racing set of books, then slowed into a crawl for book ~8, 9, 10, 11 and turned back into a racy adventure by book 12 and was a full on blood bath with plots getting sorted rather fast and furious in the final book 14.

Quite pleased how it went. Glad some main characters died. Over all very pleased.

I didn’t get much else done in the last month, so now I am free to enjoy other things, and am currently having the ‘completer type’ sense of done-ness about the whole thing.

Thanks Jo for getting me into the books and lending the early ones to me, and thanks Harvey for lending/giving the latter ones to me. Much appreciated to the both of you.