Michaela is doing a biostatistics paper, and today she was working on calculating Spearman’s Rank Correlation. While she was doing this by hand, I set about doing it in Numbers.

To calculate Spearman’s Rank for value A2 from column A use (in C2 for example):

Pulling the formula down for all values in A (giving the ranks of A in column C). Do again for the second of the paired values in B (into column D). You then can calculate d and thus calculate d2 in their own columns and finally get Σd__2. With n in cell H3 and Σd__2 in cell H2 you can pop this into a cell:

Looking at the Wikipedia article, it has a single line Excel formula, but the Numbers RANK function is not as complete as Excel’s, so you can’t use it. The formula also uses the CORREL function, but that is a linear regression, not the Spearman’s regression, so it’s not much use here either. Thus it seems you need an ugly table like this it after all: 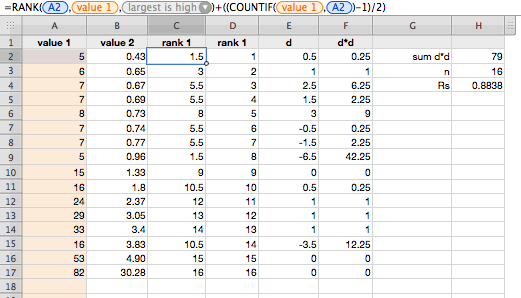 This all applies to Numbers ‘09.